One of my favorite types of quilt designs are patterns that create secondary designs. I love how the blocks work together to create a pattern and visual interest. It's something I like to incorporate into my own designs, even though it can be trickier. I think that's half the fun.

When I saw this quilt pattern in a book by Vanessa Goertzen of Lella Boutique, I really wanted to make it. The secondary pattern is fun and the dark background was really striking. Of course I had to mimic her quilt. I didn't want to completely copy her color scheme and so instead of an aqua print for the squares, I used a gray solid, and I omitted green. It's possibly more similar to the original than I usually like to go for, but that's alright. I think it turned out beautifully. 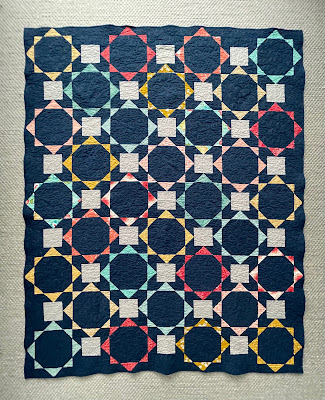 I did have to make a couple of adjustments; I didn't have any charm packs and didn't intend to buy any for this project, so I needed to figure out the cutting from yardage. It's been too long; I might also have taken the opportunity to do some more efficient piecing, like flying geese four at a time, and multiple HSTs at a time. I like to do that when I can, it makes it go so much faster. And of course I backed it with minky. I opted for silver, and then bound it with the same blue as the background to give it a bindingless feel.

I hope you had a fantastic Thanksgiving if you're in the US! Ours was great; I feel like we've got our menu down pretty well, especially the pies, which of course is the most important part. I make three: French Silk Chocolate, Pumpkin Praline, and Tart Tatin, a French caramel apple tart. All recipes from America's Test Kitchen, so you know they're perfection ;) 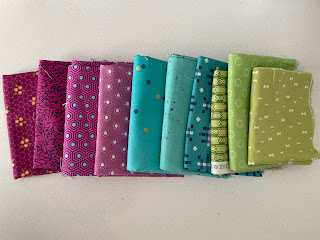 Today's Fabric Friday bundle ended up pretty similar to one a few weeks ago, I guess the colors are speaking to me right now. But, they originated from a different space, so I'm going for it. I picked out the Tula Pink hexagon print because I struggle to use Tula sometimes, and tried to make a bundle that would use it. Sometimes her color combinations are just a bit strong for me. I bought this one because I loved the brightness and it wasn't as jarring as some of her prints are, but I still haven't managed to use it yet. I like what I pulled out though and think it works really well! 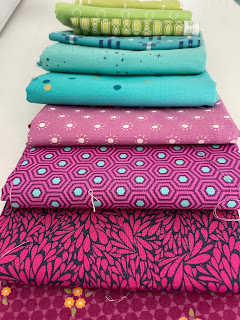 Have a great weekend!

I finished up my Christmas banner I mentioned last week just the other day and I love how it turned out! It was pretty quick, and I guess I was just nervous because of placing the embroidery, and then trimming them after to a uniform size...and not really knowing how long to make the binding...I do much better with patterns with measurements, haha. Flying by the seat of my pants is not my specialty!

But, it turned out great and I didn't need to trim too much. I did end up redoing a few as I mentioned, and instead of wasting the squares, I used them as backings for the blocks. This may not have been the best choice...I hang my banners in my stairwell in front of windows, and so during the day, especially the afternoon with the strong western sun coming in, you can see the outline of the embroidery. At the very least, I should have matched up the replaced blocks to their replacements so it would be less obvious...but it's okay. The color doesn't show through, just the outline of the letter, and its mostly not too noticeable. I was glad to not waste fabric. 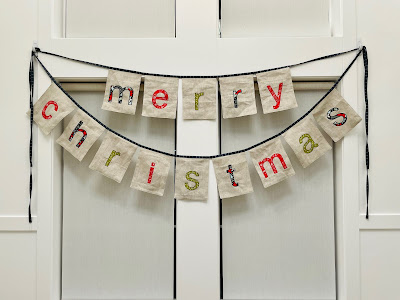 I used a gray stripe from Camille Roskelley's Christmas line and I think it turned out really great.

Now if only the rest of my Christmas projects can go as quickly and as smoothly as this one...

Today I'm skipping the bundle and instead showcasing a color scheme of Kona color chips. I have a Kona color card that I cut up and added velcro too, and keep it on my wall on a large canvas. I love it, it's a great piece of decor for a sewing room in my opinion, and it keeps the chips ready to use.

I saw something that reminded me how much I love navy and lime green. So I pulled some for that. I thought the purple was a fun accent. 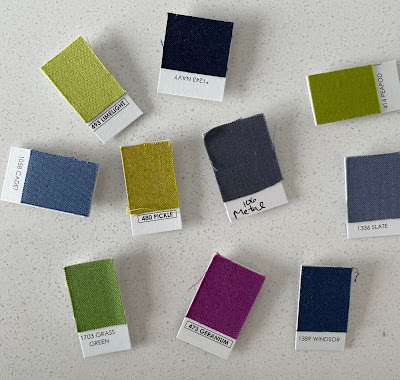 And then I pulled some that felt like fall to me. The same purple works great here. 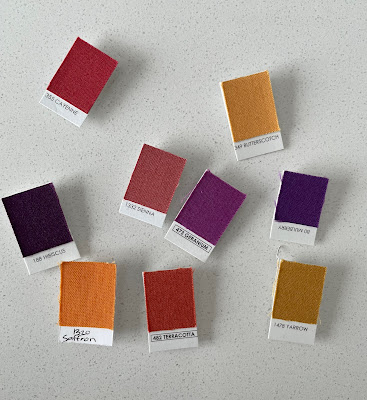 And then I realized that they're a great color combo together. 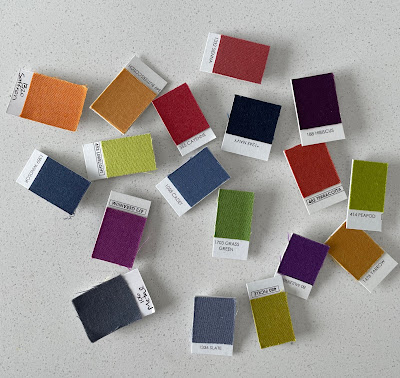 So which do I like more? I couldn't possibly pick, so I'm posting all three, haha. It's so vibrant and I feel like this is exactly what I need right now.

The craziness that is Christmas sewing has commenced. And it snuck up really fast. I planned last year to make Christmas pajamas for my girls because they're just so tall and it's disheartening to hear the cries and complaints on Christmas Eve that the pajamas that Santa delivered don't fit. I've tried numerous solutions over the past few years, and this is the final attempt. If this doesn't go over well...I'll probably ditch the Christmas pajamas altogether. As it is, I've been planning on making them all year, and I bought fabric over a month ago, but wanted to finish a few things before I pulled it out and got started. Now's the time!

In addition, I've been wanting to make a Christmas banner and decided that would be the project I work on when I'm visible, since the pajamas need to be a surprise. So that's what I started this week and here's the progress! 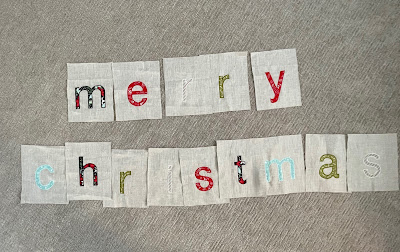 I decided I needed to remake the aqua and cream letters, which made me sad, but I'm glad I just redid them instead of regretting later that I hadn't. 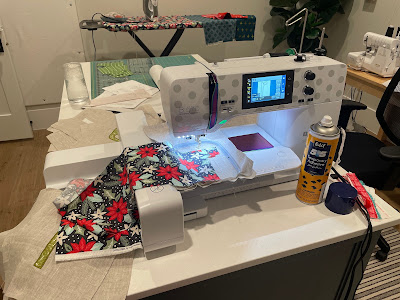 I'm using a linen from fabric-store.com and some fun Christmas prints. The black and red are by Lella Boutique and the green is by Sweetwater. The embroidery design is by meringuedesigns.net. Looking at it again, I might do two more redos, and make the I red and the s on the end black. Sigh... 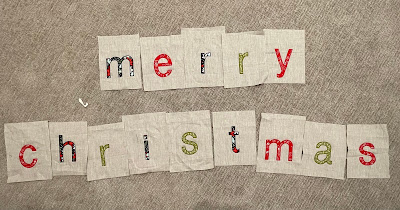 And, this probably won't get done, but I bought the panel by Sweetwater for a new advent calendar. It was too cute to pass up, what can I say?

Finally, my girls all said they wanted me to make them Christmas dresses this year. *sigh* Christmas does fall on a Sunday this year, so it's actually a good year to do it...but man, I'm feeling overwhelmed right now. However, I found a knit pattern on Vintage Little Lady, and a black and white polka dot hacci knit on Girl Charlee, so I might just cave in. I couldn't think of anything to make them this year as a gift anyway, so maybe this is a good idea. We'll see...

All the sudden I'm pretty overwhelmed by Christmas sewing. At least, the banner, quilt, and advent calendar are all things that can be ditched. But the clothes for the girls need to happen when they're not around, which is trickier, especially since my oldest likes to stay up late and often finds herself in my sewing room while I'm sewing.

I have a few prints that I really love but that I just can't seem to use. Maybe can't is too strong. I'm befuddled by them. So, I decided to pull one out that I recently purchased to see if I could pull something together. I feel like it's a pretty basic bundle, but that's okay. I really like it, and it doesn't feel basic, because it uses bold colors. 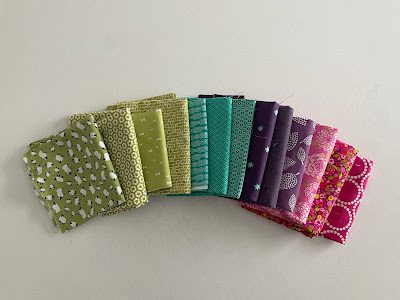 The print I used was this great Ruby Star metallic floral. I think the size of the blossoms and the color just make it a bit difficult for me. It's a beautiful color and print, which is why I bought it, but I don't typically use this vibrant magenta. And it's pretty new to my collection, so maybe it's not right or fair to say it's a tough one for me, I bought it at Quiltcon, I think...which was in February. 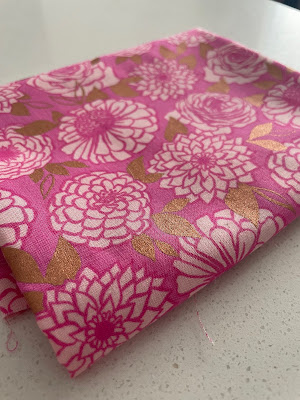 I really like the balance of warm and cool in this bundle, I think it's just a pretty effective group and now I'm trying to think if I have more I could pull in for a more complete quilt project, I'm not sure this is quite enough, haha. 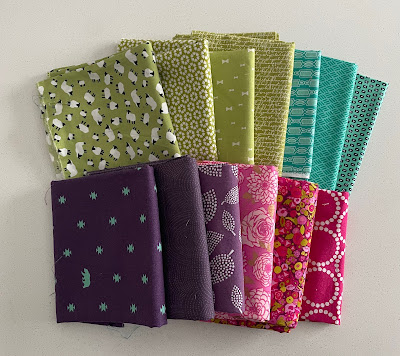 I loved Quiltcon earlier this year. It was such a fun, but exhausting day. So inspiring. The quilts were just amazing, and I loved browsing the vendors area. It was so large! I was hoping I would be able to get a Clammy ruler, and I was happy that I could. Sewtopia had them for sale and I bought two sizes, plus a Hurty ruler. I can't remember where I had seen a clammy ruler quilt, but I knew I really wanted one, and that Latifah Saafir, the designer behind the clammy ruler, was a MQG darling.

I bought a bunch of other things too...it was fun. I did try to restrain myself, but it was just all so inspiring!

I came home and was promptly very intimidated by the Clammys AND the Hurty. So I "brainstormed" color schemes and designs so I could avoid them for a bit. I really wanted to try them, but I was so intimidated!

I finally got the courage after coming up with a fun color scheme (and testing out the sewing method with some scraps) and I went for it! I was inspired by this watercolor that inspired my mini quilt I blogged about here. I referenced this quilt in that post too, but I hadn't started yet. I couldn't decide if I liked the more visual bridge idea that I used in the mini, or this clamshell color scheme better. So I just made both. 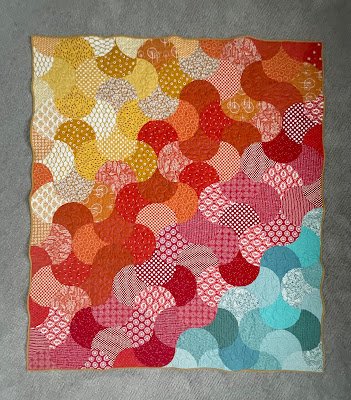 Unfortunately, these pieces are a bit off a fabric hog and so I really went through a lot of fabric. It doesn't create useful scraps either, with the shape...and the pieces are so large that some fabrics I wanted to use weren't large enough. Everything was from my stash, I don't think I bought anything specifically for this quilt...pretty sure. That's my favorite way of quilting--I keep a large stash and then sew from it instead of purchasing fabric by the project. I feel like it gives my projects a uniquely me look.

The assembly was tricky, and I bet it was a bit wonky for my quilter. She is a good sport and doesn't complain. Hopefully most of my work is flat and straight enough that once in a while she's willing to tolerate it, haha. About half way through, I realized I really should have starched my fabric. But I never starch, so it didn't occur to me before it was too late.

We backed it with a mustard yellow minky. I love the ombre effect this quilt has as they blend together and I'm proud of myself for making something hard! Maybe I'll even make another clammy quilt sometime. With starch, though. 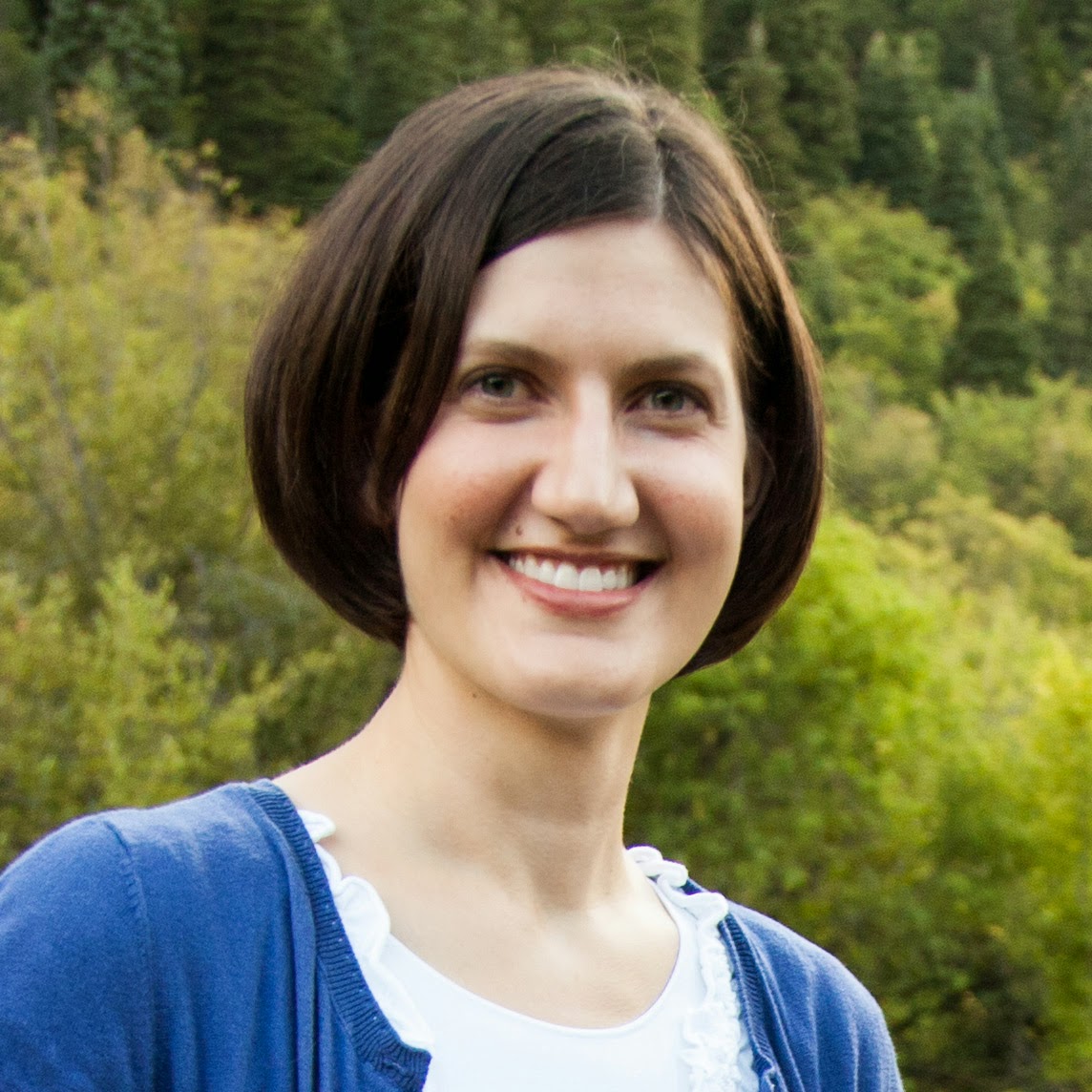 After ignoring this blog for some months during a very busy time in my personal life, I have returned! However, I noticed that blogger is not exactly cooperating. I have attempted to reply to a couple of comments and it has not let me! SO, please be aware that I really value all {legitimate} comments and I hope to fix this issue soon, but until then, please don't feel ignored. I'm so glad you are here and if I could respond, I really would. Thanks for taking the time to read about my quilting journey!